What sushi parasites can infect humans?

I used to love sushi...until I found out about sushi parasites. Now I avoid eating sushi rolls like the parasitic worm plague it can be. There are 3 classes of parasites that have been proven to commonly infect sushi rolls and sashimi. 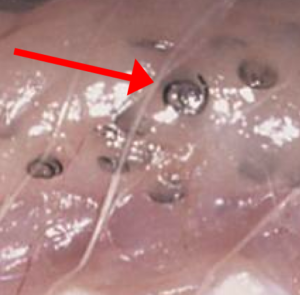 Anisakis, also known as herring worm disease, was first discovered in 1960 in pickled herring. Since it's discovery, Anisakis has been found in many different sushi dishes, including:

Anisakis parasite infection is especially common in Japan...since raw sushi fish consumption is so common there. But, with the exploding popularity of sushi in the USA, it's expected that cases of Anisakis infection from sushi will rapidly increase.

So how do you know if you've been infected by the Anisakis sushi parasite?

There are a few common infection symptoms:

According to a study done in Spain, about 2% of people infected by this sushi parasite show rheumatoid arthritis symptoms. Sometimes IBD type symptoms can present as well.

How is the Anisakis worm diagnosed? 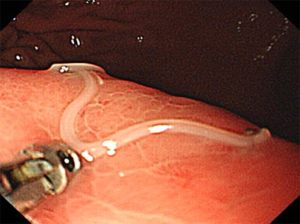 According to the CDC, "Diagnosis is generally made by endoscopy, radiography, or surgery if the worm has embedded. A history of eating undercooked fish or squid is helpful".

How is the Anisakis worm treated?

There are a few treatment options:

Humans are a dead end host for Anisakis. So that means that in about 3 months they will naturally die.

But in some cases, the worm can cause bowel obstruction and must be surgically removed.

Parasites are why I don't eat sushi anymore...

There's recently been an uptick in parasite infections from salmon sushi. And with the rise in raw salmon fish consumption, the risk of the fish tapeworm for sushi eaters is high. 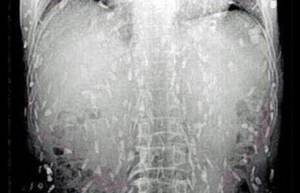 Above is an image of a Chinese man who daily ate sushi tainted by a sushi tapeworm. The tapeworms have infected not just his intestines, but also his organs.

In the worst cases, there can also be intestinal bowel obstruction (by an up to 30 foot tapeworm). Gall bladder disease can be caused by migration of tapeworm segments into the gall bladder.

How is the Diphyllobothrium sushi worm diagnosed?

This sushi tapeworm can be diagnosed by an ova and stool test.

How is the Diphyllobothrium worm treated?

It can be treated with medical drugs or herbal supplements.

How to minimize the chances of sushi parasite infection?

If you still insist on eating sushi despite what you've read, then here are a few actions that minimize your chances of a parasite infection.

If you swallow large chunks of sushi, then your digestive juices can't penetrate the parasites hidden within. But if you chew your sushi into a pulp, then any parasites present will be exposed to your stomach acid and enzymes. That will decrease your chances of a sushi parasites infecting you.

Make sure you have high levels of stomach acid

One of the easiest ways to increase your stomach acid is to stay hydrated. Have a full glass of water 15 minutes before you start eating. You also want to minimize your stress around the time you eat sushi. That will make sure your parasympathetic nervous system is dominant (aka the rest and digest branch), which can increase stomach acid.

All of these substances help kill parasites and bacteria present in sushi. That is why those spicy/acidic substances are food staples in every culture across the world.

If I were to eat sushi, I would add as much wasabi and hot sauce as I could handle. These substances all fight parasites when eaten in the same mouthful as the sushi.

These substances may also increase stomach acid as well.

Stick with saltwater sushi that is high quality

If it doesn't seem fresh, don't eat it.

Older sushi that wasn't kept frozen is more likely to have live parasites. If it doesn't seem right, trust your nose - don't eat the sushi!

This is why I don't eat sushi anymore!

Because of sushi parasites, I don't eat sushi anymore. I just don't want to catch any of these parasites.

Evan Jerkunica, Parasites.org's founder is happy to help. To get your questions answered, you can: